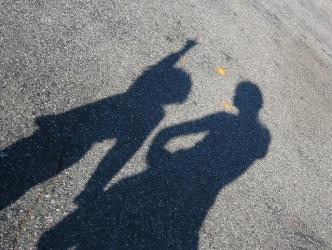 Out of the shadow

Marika is 23 years old, she is beautiful and has a bright smile, she has a strong scholastic curriculum, is actively involved in several profit and non-profit organisations, can speak four foreign languages ​​and ... has a deep vulnerability and fear of exposing herself.

The result? Most of her former classmates, even those who do not have an academic background so brilliant as her, are moving ahead much quicker in finding a good job.

Barely repressed tears escape and roll down her beautiful face … I would like to reach out and hug her like a little sister.

Why are so many, too many, women that are so brilliant and smart, so affected by this castrating insecurity? Why in the silence of our rooms and our offices, do we put our heads down and immediately, without much effort, we are able to understand and master complex content, but when it comes to shine through that understanding, we close up like a clam completely hiding our light?

The reasons are biological and genetic, but also social and personal. In historical evolution, from prehistoric times onwards, women have always been involved in the nurturing, the security, and the maintenance of the family. We were not, excluding a few limited and heroic examples, the hunters, the warriors, the leaders. Our natural place was in the shadow and through the shadow we were able to weave and create incredible outcomes, but never in the spotlight; light and visibility are uncomfortable for many woman.

We have been traditionally and in the first place wives and mothers and our body reminds us of that every month. We are the sisters of the moon and we are affected by its cycles. We are reflexive more than active. The shadow, once again, is our cocoon and natural element ...

Socially we had the courage to fight for our rights, we came out of the shadow, but in our body cells  the feeling of being inferior or being “less”is still strongly embedded: we often consider ourselves less brilliant than the male role-models that fill our horizons.

I know very few women who are capable of being in perfect balance with men, who do not fear confrontation, who are not diminished or intimidated when facing a strong man. All these women are acutely and deeply aware of their own light.

But this is exactly the point. Until you are able to make peace with your natural greatness, with your immense light, and you accept that you are whole, always, without the need to prove anything to anyone to be accepted and loved, you will continue to feel small and you will beg for external recognition to accept and love yourself.

The best way to stop disempowering yourself is to become accustomed with your inner light, and let it shine. That light has always been there, it is not something you have to build frantically through the accumulation of external results. That light shines from within. You have just to remove the veil you are using to hide it.

It really is time to be seen, to allow ourselves to be seen.

We, as women, have an important role to play in this world torn by injustice and pain and this role must be interpreted in our own way. In our own image and likeness. We must stop trying to adhere to a masculine model that doesn’t represent us. It’s in our reach and it’s a great opportunity for which we can prepare ourselves by learning to use our full potential. There is nothing missed, we just have to learn to look to ourselves in a different way and let go of that archaic mind-set that keeps us in a shadow we do not need anymore.

No one has commented on this page yet.